The Incas were an empire that developed during the 11th and 15th century. The first settlers settled in the valley of Cusco and submitted or allied with the original settlers of the valley. They had no writing but nevertheless their civilization was quite advanced for that time.  The capital of the Inca Empire was Cusco, in this city there are still many archaeological remains of the time.

The Inca Empire covered almost two million square kilometres. To the north it arrived to Pasto (current Colombia) in the south until the river Maule (current Chile) and the West is attn by the Pacific Oceans and the east the Amazonian forest.

Throughout the territory of the Incas had an important presence the Andean Mountain Range  (also called Inca Mountain range), this geographical phenomenon exercise a decisive influence in the expansion of the Empire of the Incas. Due to its varied and complex morphology, it still maintains characteristics that were present at that time as: 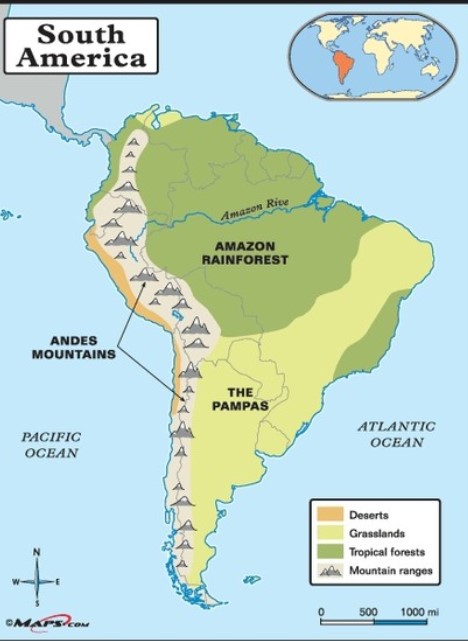 In addition to being a civilization with a polytheistic religion, the Incas had a special relationship with the mountains and snowed their environment with deep respect to these entities that provided them with all the resources needed to develop. They called them "Apus" and offered offerings and even many human sacrifices in their honor.

Machu Picchu is located in a part of the eastern slope of the Central Cordillera of the Andes (part of the Inca mountain range), here one can observe the special care that the Incas had with the environment in which they settled, without disturbing the essence of the site achieving a masterpiece of architecture and engineering.

The geography of the area also involved a complex network of roads and infrastructure such as the bridge in order to communicate with different places of the Empire, this network of roads is called  "Inca Trail ", but it is a very small part of it, which is famous and leads to Machu Picchu. However, the Inca Trail covered the entire territory of the Inca Empire

Why choose us for your Inca Trail hike

Free storage during your hike to Inca Trail

About The Inca Trail Hike Tour to Machu Picchu

Our Food for Inca Trail and Treks to Machu Picchu

The best experience we could ask for!

Elvis met us at the airport and was a fantastic first point-of-contact. He was very helpful and... (View more)

Great trip of Inca Trail to Machu Picchu - One Day!

Great service. We paid 50% in advance via Paypal and confirmed everything via whatsapp. When... (View more)

We didnt have a lot of time in Cusco, but still wanted to hike up to Machu Picchu. Kenko's 1 day... (View more)

I had a limited amount of time in Peru and I could only spare a day for Machu Picchu.... (View more)

Let me save you the time and research that I did, this is the best value you can get for the one... (View more)

Elvis is a fantastic guide!! Very knowledgeable, funny and an all around nice guy. He really... (View more)